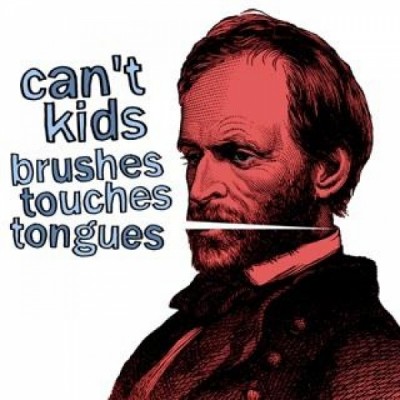 Full disclosure: I’ve always sort of been a fan boy of Can’t Kids co-founder Adam Cullum. From his heart-on-sleeve solo recordings in Falling off a Building to his multi-instrumental prowess and role as the energetic center of the literary-folk/pop group Magnetic Flowers, I’ve always considered him one of the scene’s finest assets. Whether you love or hate what he is doing on stage, it’s hard to deny the passion and instrumental power of his performances. And now, we have Can’t Kids.

The band was born as a duo, with Cullum and Jessica Oliver bashing out poppy tunes at deafening levels in the house they shared. The two frequently shared vocals and seem to (at least initially) take turns playing drums or guitar. White Stripes comparisons quickly followed, which is something the two found puzzling when I talked to Cullum back in July. At first I shared their confusion, but the more I’ve listened to this debut, though, I think there might be some logic behind the linkage, and it gets to the heart of what makes both groups tick.

We tend to think of The White Stripes as this primal blues-based monster, with the high octane riffs of songs like “Seven Nation Army” or “Fell in Love with a Girl” being exemplars of their muscular ferociousness. But this is also a group who made the largely marimba-based Get Behind Me Satan and featured such twee pop ballads as “We’re Going to be Friends” and “I Want to be the Boy to Warm Your Mother’s Heart.” These odd contradictions—of Son House and Burt Bacharach, The Sex Pistols and Belle & Sebastian—are actually what seem to capture the group the best.

Similarly with Can’t Kids, the initial reaction always seems to come from their loudest, most heavy-edged moments. The group’s sound seems frequently inspired by the pounding and propulsive electric guitars of 90s indie rockers like Modest Mouse or Pavement, with pounding drums and meandering, electric guitar riffs that often seem nearly unhinged. Correspondingly, there are maniacal shouts and misanthropic observations that also mark the best of Modest Mouse: see Oliver’s inflamed howl of “I wanna see this city burn/I wanna be Sheeeer-man!” on “Stab/Grab”  or  Cullum’s snarling, irony-tinged pronouncement that “If I had a nickel for every person that I hate/I could buy a fancy rifle and blow us all away” on “Dimes,” a line that’s a pretty direct rip from MM’s “Cowboy Dan.” They also, albeit less frequently, employ the sardonic non-sequesters of Pavement’s Stephen Malkmus (“Stab/Grab” is probably the best example).

But the group is also pulling from another set of less fearsome indie rock traditions—the literary grandiose-ness of something like “Ghost Killah” seems more Neutral Milk Hotel or Decemberists than anything else, and the frequent borrowing of commercial hooks (“maybe it’s Maybelline,” “line in shambles?/Try Campbell’s!”) or pointedly high-octane pop song structures (“It’s Yrs” or “Happy Hippie Songs”) seem to create similar sorts of contradictions that allowed The White Stripes to thrive.

The two members that Oliver and Cullum chose to add to the group emphasizes this odd dichotomy. (Formerly?) hardcore bassist Henry Thomas was brought into the fold to add a pummeling low end which frequently adds to the menace and mania of the sound, while cellist Amy Cuthbertson brings an obvious beauty and chamber-pop vibe to the proceedings. Of course, in a fitting irony, often times Thomas’ bass line propels a poppy tune like “It’s Yrs” and Cuthbertson provides a strong sense of foreboding with her dark string parts. So, either way, a sense of difference and discontinuity seems to be emphasized.

Still, for all that comparison does in fleshing out the conceptual appeal of the band, what really sells it is the obvious chemistry between Oliver and Cullum. The sense of friendship and community apparent from much of the lyrics, from inside jokes and a shared past to a sense of honesty and love among true partners, is evident from even a cursory experience with these tunes. In addition, their shared vocals, equal parts hooky melodies and shouted glee, have an infectious power that is one of the best illustrations of a band enjoying making music so much that you have no choice but to like it too.

If you can’t tell, this record gets two pretty damn big thumbs up from Jasper!