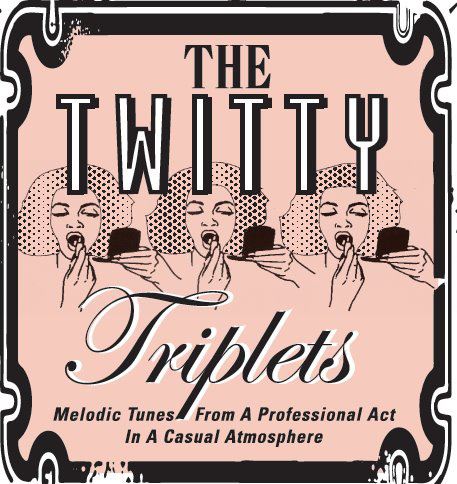 “It’s like doing acid while reading a Flannery O’Connor short story in a dark room, illuminated by the reflective light of a twirling disco ball.”

That was the description I recently heard by a much smarter man than myself as he summed up “The Twitty Triplets,” my upcoming musical creation presented by Trustus Theatre in the old Tapp’s Fountain Room. I think it’s a compliment and plan to embrace it as such.

Yes, after their first performance 20 years ago, The Twitty Triplets are back— brassier, bossier and better than ever. For the uninitiated, I discovered the Twitty Triplets performing back in 1992. They were working girls, night shift operators at the old spork factory on Augusta Highway, simple triplets who dreamed of a glittery, musical future. They had just started to sing in public when I met them at the Triangle City Christmas pageant. You’ll recall town officials would transform the two-story Zesto ice cream cone into an overly large Christmas tree that served as a seasonal centerpiece for Triangle City, Gaston, and other citizens of South Carolina’s “Speed-dee” corridor.

I’ll never forget the Twittys when they took the stage and sang All I Want for Christmas is My Two Front Teeth wearing seasonal Bedazzled sweatshirts sponsored by Augusta Highway’s Dentures and More. It was a brilliant marketing move and I knew these girls were headed for bigger, brighter, and more legal venues. I took them on as clients right after the spork factory closed (about the time Kentucky Fried Chicken rebranded as KFC and started in house spork production).  With no day job distraction, the Twittys were free to concentrate on their music and we hit the ground running.

First off was an opening act for a city of Columbia Animal Shelter fundraiser, where dogs weren’t the only things howling that night. I’ll never forget when Aynor Twitty climbed up on the main dog cage to sing her rendition of  Diana Ross’ popular disco hit, Upside Down. The 13 audience members literally gasped when Aynor’s song culminated in an acrobatic move where she was indeed, held upside down, by fellow triplets Monetta and Cayce. Unfortunately, Aynor passed out from the head rush, blowing limply in the wind, until she was rushed to what was then known as Lexington Hospital and Lawnmower Repair. (She turned out fine but, to this day, Aynor cannot recall the lyrics to Upside Down and the name Diana Ross causes a severe eye twitch and throat flush.

But since that time, The Twitty Triplets have built a large and loyal following of nearly 36 bill collectors fans, performing their Happy Half Hour Show at Crockmeyer’s Again (the rebooted name after fire destroyed the original bar); The Blaney Drag Strip Concession Stand Show; and, of course, The Swansea Black and White Ball, (“Where ALL are welcome”).

The Twitty Triplets were described as a “musical melee” by late, great State reporter Jeffrey Day and, “A disco disaster that crosses the line of good taste,” by August Krickel, now the theatre editor for Jasper Magazine. And now, they stand proud, poised, and ready to perform for a brand new audience as they bring “Melodic tunes from a professional act in a casual atmosphere” to downtown Columbia in the Tapp’s Fountain Room. 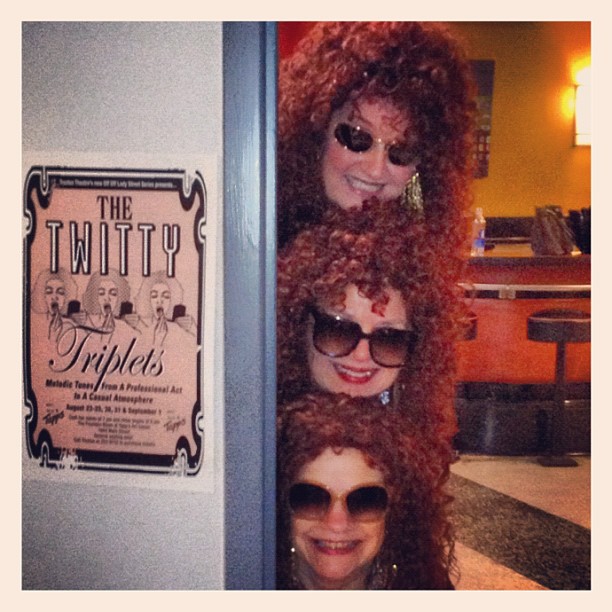 With only six performances for a limited crowd of 60 lucky listeners per night, The Twitty Triplets invite you to open up a cold PBR and enjoy the musical ride, August 23, 24, 25, 30, 31 and September 1 at the Tapp’s Fine Arts Center. Cash bar opens at 7 pm each night and show begins at 8 pm. And on both Friday nights, August 24 and 31, enjoy a post show disco karaoke party. General seating for all shows! To purchase or reserve a
ticket, call the Trustus Theatre box office, Tuesday – Saturday, 1-6 pm. Tickets are 15 bucks.

(Robbie Robertson is a playwright and screenwriter, and a graduate of both the University of South Carolina as well as UCLA’s professional program in screenwriting. Robertson’s first play, Mina Tonight! was published by Samuel French Inc. and has been consistently produced in regional theatres across the nation. He brought 60s TV to life by directing a staged version of Gilligan’s Island at Trustus Theatre and his screenplays have placed in several national contests. His latest—Sweet Child of Mine—was named one of the top 12 comedy scripts in the 2010 Austin Film Festival’s Screenwriting Competition. He recently completed a staged adaptation of the film Satan in High Heels and will revive one of his first theatrical productions—The Twitty Triplets—as part of Trustus Theatre’s New “Off Off Lady Street” series. He is currently developing several independent television and film projects in addition to his work as a marketing and communications consultant.)

What Jasper Said is the blogging arm of Jasper – The Word on Columbia Arts, a new written-word oriented arts magazine that serves artists and arts lovers in the Columbia, SC area and its environs in four ways: Via Print Media – Jasper is a bi-monthly magazine, releasing in print six times per year in September, November, January, March, May & July, on the 15th of each month. Jasper covers the latest in theatre and dance, visual arts, literary arts, music, and film as well as arts events and happenings; Via Website – Jasper is an interactive website complete with a visual arts gallery, messages from Jasper, an arts events calendar that is updated several times daily, bite-sized stories on arts events, guest editorials, local music, dance & theatre videos, community surveys, and more; Via Blog – What Jasper Said -- you're reading this now -- is a daily blog featuring a rotating schedule of bloggers from the Jasper staff as well as guest bloggers from throughout the arts community; Via Twitter – Jasper Advises is a method of updating the arts community on arts events, as they happen, with more than a half dozen active tweeters who live, work, and play inside the arts community everyday ~ Jasper Advises keeps the arts community abreast of what not to miss, what is happening when it is happening, and where to be to experience it first hand.
View all posts by Jasper →
This entry was posted in General and tagged August Krickel, Cindi Boiter, Cynthia Boiter, Jasper, Jasper Magazine, Jeffrey Day, Robbie Robertson, Tapps Arts Center, TRUSTUS Theatre, Twitty Triplets. Bookmark the permalink.