Workshop Theatre‘s summer show, Disney’s Camp Rock – The Musical, is enjoyable, family-friendly fun, set to an energetic rock beat, providing a nice chance for some talented teens and tweens to take center stage.  Based on two popular Disney tv movies that were vehicles for Demi Lovato and the Jonas Brothers, the show isn’t exactly Sondheim, but aiming for the 8-18 age bracket means it’s by no means a children’s show either. Instead, we re-visit comfortably familiar themes of puppy love, teen rivalries, and summer camp hijinks, accompanied by a lively, contemporary pop-rock score. Sure, like any Disney product there is a little sense of some pre-packaging for a target demographic.  The book, by Robert L. Freedman and Faye Greenberg, is based on scripts and characters from five authors, while the score, “adapted, arranged, and orchestrated” by David Lawrence (a veteran Disney composer, who worked on all three High School Musical films, and is the son of Steve Lawrence and Eydie Gorme) incorporates numbers from 20 (!) songwriters, meaning that there was just a little assembly line work going on. Chief among those writers is Kara DioGuardi, the American Idol judge who has written hits for former Disney starlets like Brittany Spears, Christina Aguilera and Hilary Duff, while others have worked with everyone from Kelly Clarkson to Katy Perry.  What impressed me most was how admirably and professionally the cast of 33 local youngsters (only a few are past their teen years) acquitted themselves on stage, demonstrating yet again that there is an entire generation of new local performers waiting in the wings. 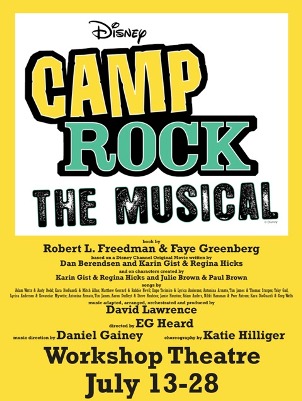 The titular Camp Rock is a summer performance/music camp for kids, run by Brown Cesario (George Dinsmore), an aging rocker from the early MTV era, who capitalizes on the popularity of his three nephews, members of a popular boy band, Connect 3. When rival Camp Star (more luxurious, more regimented, and founded by the drummer Cesario fired 15 years before) threatens Camp Rock’s future, it’s no plot spoiler to reveal that the protagonists will have to overcome personal issues and teen drama, to pitch in together for a battle of the bands.

Katie Foshee has done nice work in any number of ensemble and supporting roles in recent years; here she graduates to romantic lead, the rocker chick Mitchie, and doesn’t disappoint. Resembling a prettier Danica McKellar (Kevin’s dream girl on The Wonder Years) Foshee displays a strong, appealing voice, and a talent for quick bantering dialogue. Nominal male lead Alex Cowsert, as Shane, likewise distinguishes himself vocally, especially in a couple of sweet love songs with Foshee. I say “nominal,” since middle brother Nate (Avery Herndon) gets a romantic sub-plot too, and he very nearly steals the show with the song “Introducing Me,” also featuring Alex Webster as the winsome Dana.  I recall Herndon from the ensemble in Spring Awakening this winter at Trustus, but, like Foshee, here he gets a chance to showcase some serious vocal talent.   When he and Webster sing together, they are just adorable; if they were any cuter, they’d be puppies.  Of course, there has to be a teen diva in the show like this, and Kathryn Reddic plays “mean girl”  Tess with gusto, plus gets some of the best dance numbers. Also of note is Marc Smith as Tess’s rival Luke; his R&B-themed song “Fire” is done in an ultra-deep, resonant baritone, quite rare in a world of Ushers and Chris Browns.  Catherine Davenport, Tara Wallace and Mellie Boozer make the most of supporting roles as Mitchie’s fellow campers, while the tiny Quincy Sykes gets some good laughs as a precocious and mischievous drummer-girl-in-training.  As above, the entire cast does fine in the group numbers, and even the youngest performers (some seem about age 8) keep up move for move, step for step, with their older peers.

Musical Director Daniel Gainey (also a gifted actor, as we saw in In the Next Room at Trustus just a few months ago) achieves a full, rich sound from his young and largely female cast.  At no time do we ever hear “Hard Knock Life”-style, sing-song children’s voices; instead we hear the same catchy harmonies featured in any top 40 song on the radio today.  Choreographer Katie Hilliger also ensures that everyone’s movements on stage are fluid and similar to the moves in any popular rock or hip-hop video.  The cast sings to a recorded score; that combined with 33 wireless mikes guarantees that there will be some issues with volume and feedback, but I have to say that any minor glitches were resolved almost instantly, and by and large, Baxter Engle‘s sound design is effective. Most of the cast have long hair and/or hats, and so for a pleasant change, head mikes were inconspicuous.

Director E.G. Heard makes everything flow and sound quite naturally; most of these kids could do a quite credible job playing these same roles in some professional touring
version of this show.  Randy Strange‘s set incorporates a lush, realistic, painted drop (credit also goes to scenic artists Ed Sexauer, Beth Burnside and Pam Johnson) that depicts a lake and adjoining dock. Combined with the stage floor painted to suggest the shadows of foliage overhead (Barry Sparks‘ lighting design contributes to this effect too) and a couple of basic log cabin facades, the location is instantly and clearly defined, while leaving most of the stage free and uncluttered for the dance numbers.  Sparks also includes some nifty and inventive lighting effects in the pieces performed by the Star Campers, including “Tear It Down,” featuring Reddic and Smith.  While most of the costumes are
ostensibly “street clothes” and typical casual wear, Alexis Doktor plays with a lot of fine nuances; one camper wears a sequined shirt, another prefers tie-dye, and a
third wears a plaid mini-skirt with dark leggings, each embodying a particular “type” of high school fashion and preference.  The Star Campers, on the other hand, all wear
uniform-like, general issue t-shirts, making a subtle statement about the difference between the two groups.  When we notice one Star Camper wearing a slightly different and more attractive design, it’s no surprise that she will turn out to be important to the plot. Even Dinsmore sports an authentic CBGB shirt, immediately defining Cesario’s era before he has to say a word. I do wish that Cowsert and Herndon were clothed in a bit more glam fashion, to signify that they are actual rock stars, but youngest brother Jason (Ethan Cash) sports a funky hat and short pants, capturing the look of a pre-teen idol.

Don’t get me wrong – like most Disney fare, much of Camp Rock is light-weight, derivative, and enjoyable for the moment, yet disposable. The plot is resolved via a deus-ex-machina slipped in so quickly you almost miss it.  Few of the many supporting characters are really developed, even though the entire play runs under an hour and 45 minutes.  A central conflict (stemming from Mitchie alienating her friends, by driving them so hard to succeed) was echoed in at least two reruns of The Big Bang Theory this past week alone, as well as in the final season of Buffy, at least one episode of Saved By the Bell, and probably many others previously.  Herndon’s inability to communicate with the girl he’s crushing on goes all the way back to She Stoops to Conquer in the 1700’s.  The rousing Act 2 opener “Heart and Soul” is very reminiscent of the late 80’s hit “Wild Wild West” by The Escape Club, while Mitchie and Shane’s power ballad “Wouldn’t Change a Thing” reminded me a bit of the Ann Wilson-Mike Reno duet “Almost Paradise.”  And just about every musical number has a parallel scene in High School Musical.   Still, these are excellent sources to borrow from, and most audience members won’t recognize how familiar it all seems.  The joy of Camp Rock is in the accessible, upbeat music, and how proficiently the local cast brings it all to life.  An earlier generation followed Jem and the Holograms; for me, it was the Monkees, Scooby Doo and the Partridge Family, and those older still may recall Dobie Gillis or even Andy Hardy;  Camp Rock is simply the latest incarnation of this same youthful, escapist entertainment.  I cannot imagine any teen or tween not enjoying it.  As for adults?  Well, I had an excuse to go: reviewing the show.  And my first thought when the lights went up?  “Those kids rocked the house!”  So I’d advise you to take your children or grandchildren, or find some younger siblings, cousins, or neighbors’ kids, and treat them to an evening of theatre, one tailor-made for their musical tastes.  They’ll have a blast, and you might just too.

Disney’s Camp Rock – The Musical runs through July 28th at Workshop Theatre; contact the box office at 803-799-6551 for ticket information.