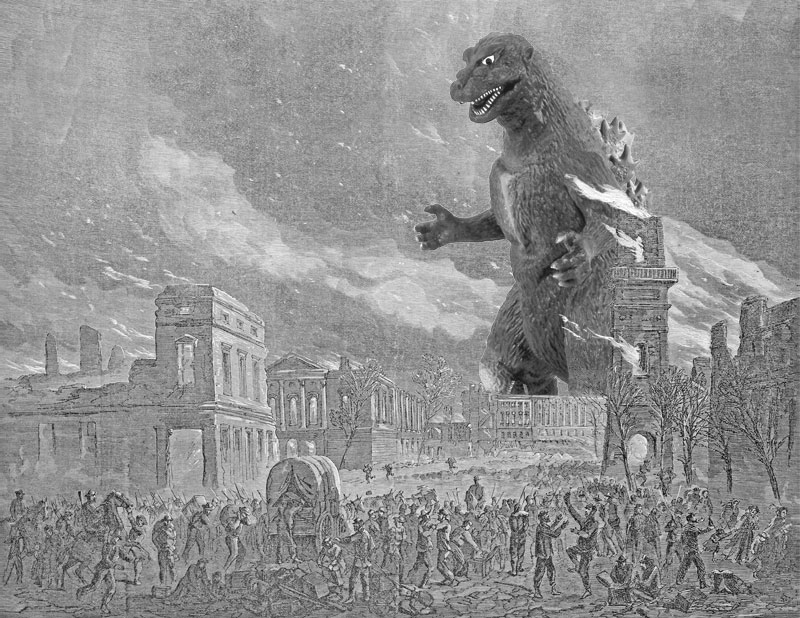 Sean McGuinness has taken his lifelong passion and obsession with Godzilla to the next level in his artwork. McGuinness uses his collection of Godzilla collectible figures, digital photography, and Photoshop in order to create his pieces. He has become known for his “Godzillafication” works in which he places the image of Godzilla into famous paintings and pieces of art. McGuinness will be showing these works along with some others at the Art Bar on July 19th at 8 p.m.

When collectors of kaiju — the Japanese word for strange beasts — began displaying their collections on the web, McGuinness wanted to take part in the action. However, he wanted people to continue visiting his site rather than just looking at his collection once. This led him to create comics using his Godzilla figures along with other famous kaiju. Over the last 12 years, McGuinness has produced about 1,800 comics with his collectible figures.

It wasn’t until his wife encouraged him to make “real art” that McGuinness began working on Godzillifying pieces of art. His first, and now signature, piece was “1954 in 1865” in which Godzilla can be seen stomping through Sherman’s burning of Columbia. The piece got McGuinness nominated for Artist of the Year at the Columbia Museum of Art Contemporaries. Although he didn’t win the award, he felt that the nomination was a sign that he should dig deeper into the idea of Godzillafication.

McGuinness hopes that through his artwork the legacy that is Godzilla will live on in a world that may be inclined to forget the monster. “Godzilla is an icon of over 50 years,” McGuinness said. “Not that he needs my help, but I want to keep his message and his atomic fire alive in this world of distractions like iPods, smart phones and etch-a-sketches.”

His show at the Art Bar will be the first of this type for McGuinness. In the past, he has done some convention circuits, including Nashi-Con and Cola-Con, but he has never put together a personal show of this scale. The show will include two exclusive prints that use the Art Bar as a medium, and these prints will never be used again. The Art Bar is scheduled to project video of some of Godzilla’s greatest fight scenes, and McGuinness will be selling prints of his artwork as well.

“I want them to take away some of those pieces so they have a little bit of me and Godzilla in their homes. Or at least tell their friends around the water cooler or bar, ‘Guys, I saw this really funny thing last night,’” McGuinness said.

Even if those who attend the show at the Art Bar don’t take away a piece of his artwork, McGuinness hopes that they will take away some sense of happiness or excitement about the art that he is creating.

The show is scheduled to take place on July 19th at the Art Bar at 8 PM, and the show will be on display for about a month. The Art Bar is located on 1211 Park Street.

What Jasper Said is the blogging arm of Jasper – The Word on Columbia Arts, a new written-word oriented arts magazine that serves artists and arts lovers in the Columbia, SC area and its environs in four ways: Via Print Media – Jasper is a bi-monthly magazine, releasing in print six times per year in September, November, January, March, May & July, on the 15th of each month. Jasper covers the latest in theatre and dance, visual arts, literary arts, music, and film as well as arts events and happenings; Via Website – Jasper is an interactive website complete with a visual arts gallery, messages from Jasper, an arts events calendar that is updated several times daily, bite-sized stories on arts events, guest editorials, local music, dance & theatre videos, community surveys, and more; Via Blog – What Jasper Said -- you're reading this now -- is a daily blog featuring a rotating schedule of bloggers from the Jasper staff as well as guest bloggers from throughout the arts community; Via Twitter – Jasper Advises is a method of updating the arts community on arts events, as they happen, with more than a half dozen active tweeters who live, work, and play inside the arts community everyday ~ Jasper Advises keeps the arts community abreast of what not to miss, what is happening when it is happening, and where to be to experience it first hand.
View all posts by Jasper →
This entry was posted in General and tagged Art Bar, Casey White, Godzilla, Jasper, Jasper Magazine, Sean McGuiness. Bookmark the permalink.

One Response to The Godzillafication of the Art Bar? By Jasper intern, Casey White