April was the month for several hundred amazing cultural events all going on seemingly at once. The hubbub may have died down a bit, but there’s still plenty to do in May, especially if you’re an enthusiast of live theatre.  For example, did you know Columbia regularly has Shakespeare in the Park?  Who needs New York?

This spring, the South Carolina Shakespeare Company is presenting a comic tribute to not one but all of Shakespeare’s works, first in Finlay Park this week, then at Saluda Shoals next week.  The show opens with a preview performance tonight, Tues. May 15th, and then continues Wed. through Sat. (5/19) in the Finlay Park Amphitheatre, with all shows starting at 7:30 PM.  The cast then migrates to Saluda Shoals Park for three more performances, Thurs. May 25th through Sat. May 27th, with all shows again at 7:30 PM. 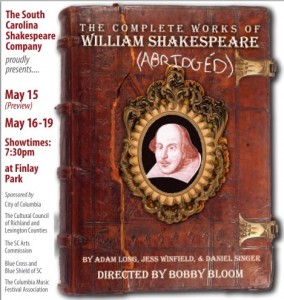 From their press release:

SC Shakespeare Company has a sense of humor about its patron saint!

For the past 19 years, SC Shakespeare has given Columbia a great many of the Bard’s most famous plays from The Taming of the Shrew to Henry V. This spring, they wanted to give Columbia audiences something a little different but very enjoyable for patrons and their families.

The company presents The Compleat Works of William Shakespeare (Abridged), written by Adam Long, Daniel Singer, and Jess Winfield. It’s been performed internationally, including hit productions all over the US and Europe.  The show pays homage to Shakespeare as much as it mocks him, and is actually a fair introduction to the Bard for a first-timer by watching the players dance, act, parody, and soliloquize through Shakespeare’s works, raucously and without regard to political correctness. And, while the play pokes fun at the Bard’s works, it never looks down on the actual writings, showing a great deal of respect for both the material and the author.

Directed by Robert Bloom, the three players – Jeff Driggers, Marques Moore, and Elizabeth Stepp – are a young and vibrant trio, entertaining and involving the audience as much as possible in skewering all 37 of the Bard’s plays in one two hour show (with intermission)!   The comedy is edgy – demanding craft: even the simplest gags require taste, timing, discipline, and the willingness to push things to the limit but not beyond. The end result: both homage and honest fun!

Come out with family and friends for a raucous evening of laughter.

We must note that Bloom made a vigorous and assertive Benvolio in a Finlay Park Romeo and Juliet a few years ago, smacking down those Capulets like flies, and Stepp has caught our eye with some amusing performances at Columbia Children’s Theatre, so we suspect this is a show not to be missed.

In other news, there are three other great shows also running in town currently, and it’s not the worst of dilemmas, at least in the broader sense, to have to figure out which great performance you want to see first, since there’s something for just about every taste.  By now you already know about the new show at Trustus, In the Next Room, or the Vibrator Play, which runs through Sat. May 26th. (If not, my review is at http://jaspercolumbia.net/blog/?p=1478.)  Town Theatre meanwhile is presenting Grease, and there’s a review at www.OnstageColumbia.com .  This show has been held over, and now also runs through Sat. May 26th. Most recently, Andrew Lippa’s Wild Party just opened this weekend at Workshop Theatre, and there’s a review for it as well at the same site.  Sure enough, it too runs through Sat. 26th, meaning Sunday the 27th will be a sad day for local theatre-goers.  Not to worry – pick up a copy of the new Jasper – The Word of Columbia Arts (issue # 5, which is being released in about 3 hours) for details on what shows are being done this summer!    And look for a review of The Compleat Works of William Shakespeare (Abridged) from Jillian Owens in a few days at that same site, www.OnstageColumbia.com .