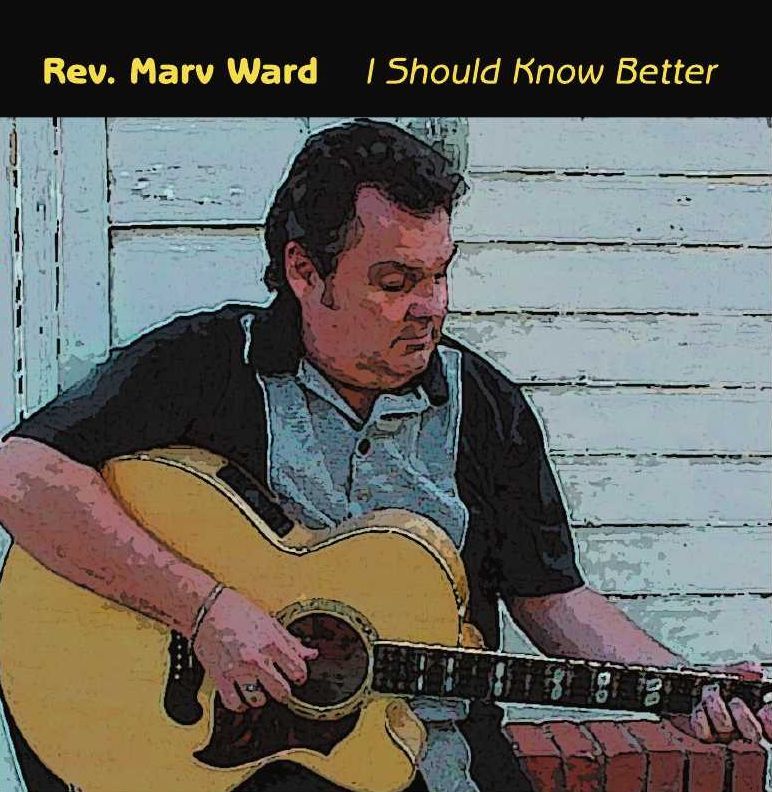 While we here at Jasper have been doing (what we believe to be) a great job covering a wide variety of arts activities throughout our fair city, one thing that has been lacking has been more frequent updates on the amazing quality and variety of local music releases over the last 10 months or so we’ve been active, which is something we’d like to change, starting with a rather under-appreciated aspect of the Columbia’s music scene: the blues.

While not the most blues-associated city in the world, Columbia definitely has a few blues-related things to be proud of: Word of Mouth Production’s annual blues festival in MLK Park, weekly jam sessions at Mac on Main’s, and Clair de Lune’s Blues Moon radio show on WUSC, just to name a few. Another highlight of the scene is Rev. Marv Ward, a longtime blues guitarist and songwriter who plays continually around the city. Earlier this year he released I Should  Know Better, just his third solo album since he started out professionally as a songwriter in the 70s. Ward got his start early as a guitar player in a variety of blues and rock and roll bands, and over the years has shared stages with the likes of John Hammond, Dave Van Ronk, Big Bill Morganfield (son of the great Muddy Waters), and Aerosmith, and this collection actually includes unrecorded songs from throughout his long musical career.

Despite the star power of his past, these days Ward is more comfortable hanging with a talented group of local musicians. Recorded at the venerable Jam Room, Ward’s core backing band for the record included longtime scene members bassist Mike Mahoney and Vic Scaricamazza on the drums, along with frequent contributions from harmonica player Mike Fore, slide guitarist Rusty Davis, and mandolin from Steve Bennett. Ward also makes harmony singers Jenn McCallister and May Kirby central to the record’s sound, particularly on the girl group/beach music-heavy tune “Ridin’ on the Daydream.” Two other musical kindred spirits from the scene, Bentz Kirby (Alien Carnival) and David Hane (Devils in Disguise), trade verses on the final cut, the classic country-inspired “Tennessee Whiskey.”

The record opens with four tunes that are in the center of Ward’s wheelhouse, all of which make use of classic blues structures and the veteran guitarist’s effortless lead work. Ward’s approach has always been a laid-back mish-mash of styles, but here he seems to square in on a John Hiatt-meets-Muddy Waters vibe that fits perfectly with his more conservative blues tunes. The second half of the record, as if to apologize for the more straightforward (although uniformly strong)   opening, sees Ward stretching his legs quite a bit. The title cut takes a Buddy Holly rhythm and far more overt R&B vibe than anything that came before it, and from there Ward includes a trio of English folk and Celtic-influenced tunes (“Wallflower,” “Dance of Kindred Spirits,” and “Come Down to the River”), the California country-rock of “Virginia,” and the aforementioned “Ridin’ on the Daydream” and “Tennessee Whiskey.” Ward even throws in a twist on a classic blues conceit with his boomer-come-hither tune “Come Over,” which takes the genre’s love of ridiculous metaphors (“if you got the cheese, baby, I got the wine”) into near-Spinal Tap territory.  Even if you are tempted to laugh, though, the song is saved by a ridiculously good hard rock riff and the fact that Ward can, well, play.

In fact, throughout the record (and despite the numerous guest instrumentalists and vocalists), Ward’s consistency as a vocalist, guitar player, and songwriter never falters. His playing rarely lets you forget he is a blues player at heart, but traces of such unlikely influences as Jerry Garcia and Neil Young seem to pop up, even though he tends to more concise and structured solos than either. As a songwriter, his rather humble approach to the long legacy of the styles he works with balances originality and homage in a way that many contemporary blues musicians often find difficult.

Having said all that, the most important thing to remember about Ward’s record is that it’s been made largely a document of the songs he likes to write and perform, and for the relatively small audience of South Carolinians who either already know his music well or who tend to gravitate to more laid-back roots music styles anyway. That it is so often remarkable is almost beside the point—which really makes it all the more remarkable.

One Response to Record Review: Rev. Marv Ward – I Should Know Better